Nothing is easier or more delicious than a beautiful, caramelized Baked Ham with Pineapple Brown Sugar Glaze. The perfect meal for a simple Sunday dinner, to feed a crowd, or for holiday entertaining like Easter and Christmas dinner. 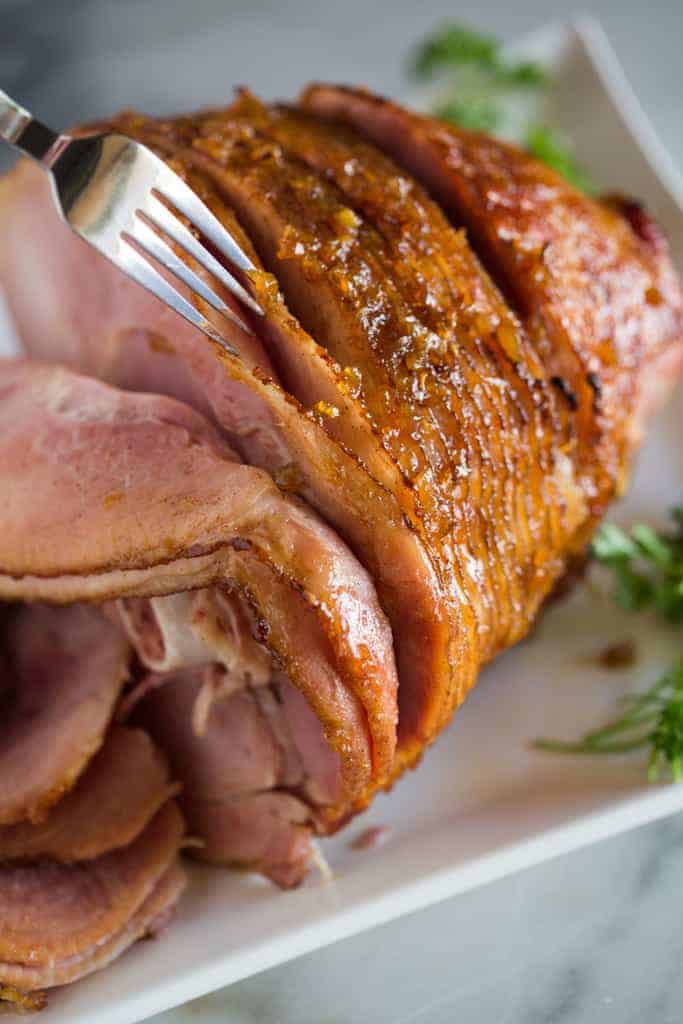 There are few types of meat I love more than a delicious ham, and this baked ham with pineapple brown sugar glaze is amazing. It’s the perfect recipe for a really easy dinner, dinner for a crowd or potluck, or don’t forget Easter and Christmas holiday dinner. You just can’t go wrong with something so simple, crowd-pleasing, and easy to make.

As easy as this recipe is, there are a few things that can take your ham-making experience from good to great.

First, and most important, is choosing which ham to buy. This recipe is tailored for an already cooked, bone in, spiral cut ham. That’s my favorite type of ham to buy because it’s delicious, and the work is already done for me.

A spiral cut ham means the ham has already been cut into thin slices. The bone-in hams also give more flavor to the ham meat. These hams are already cooked, so you can enjoy them cold on a delicious homemade roll sandwich, or warm them in the oven with a simple glaze. 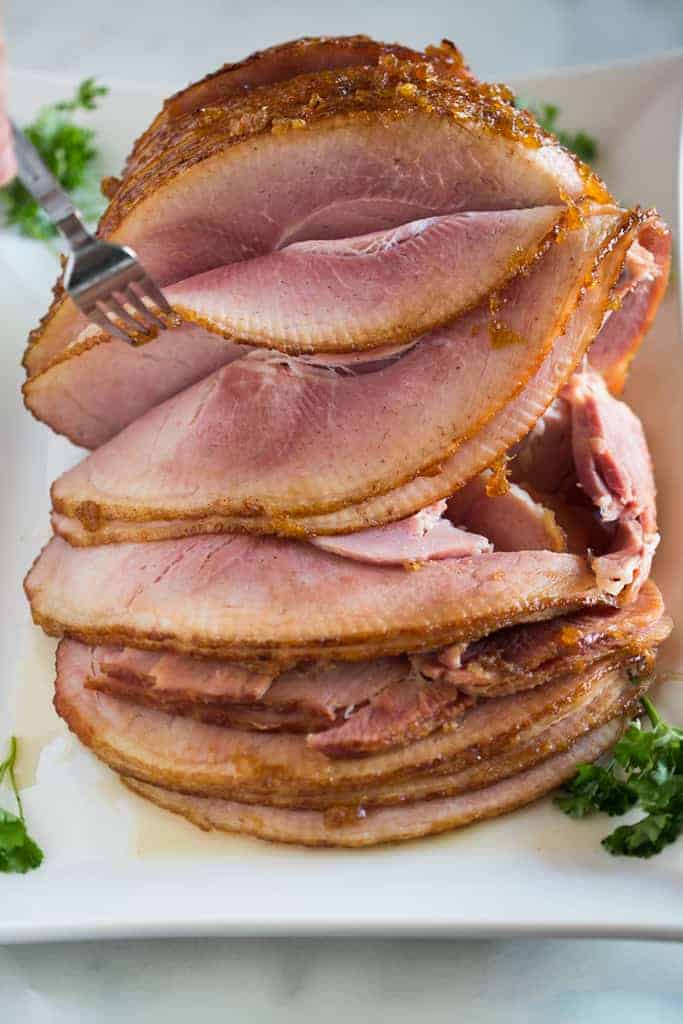 I buy my ham from Costco because I think the quality of their Kirkland signature ham’s are amazing, especially for the price.

How to make an easy baked ham with pineapple brown sugar glaze:

Allow the ham to come to room temperature, which could take about 1-2 hours. Doing so will make for a quicker warming time in the oven, which will ensure your ham doesn’t dry out. We’re just looking to warm the ham, since it’s already cooked.

While the ham is coming to room temperature, you can make the glaze. Combine all the ingredients in a saucepan and stir until smooth. Reduce heat to low and simmer until thickened, with a syrup consistency.

Place the ham in a foil-lined roasting pan or deep baking dish. Brush a little of the glaze all over the outside of the ham. Cover it well with foil and bake at 300 degrees for 1 ½ to 2 hours. 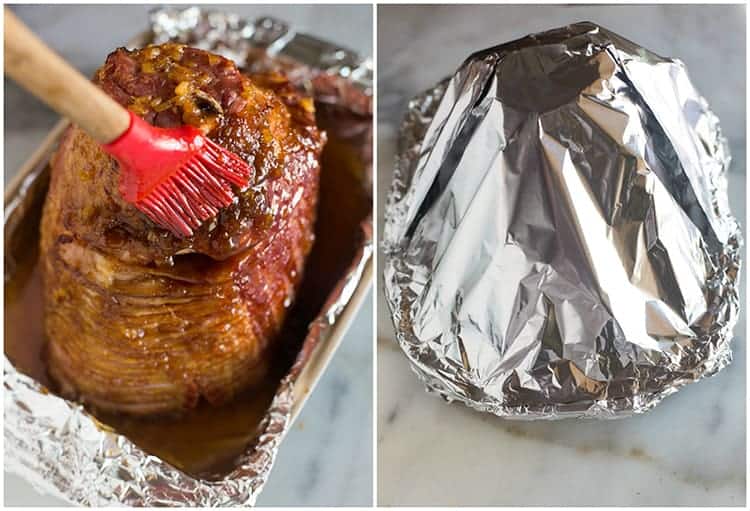 Remove it from the oven and brush the rest of the glaze over it. Increase the oven temperature and bake for another 15 minutes.

Remove it from the oven and tent with foil for 15 minutes before serving. 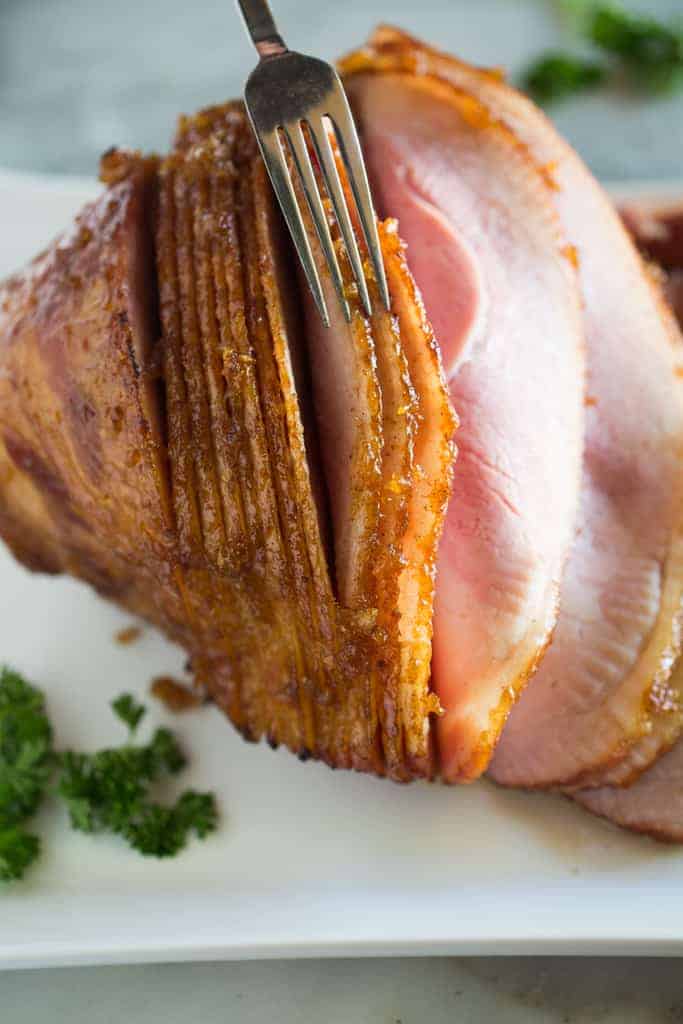 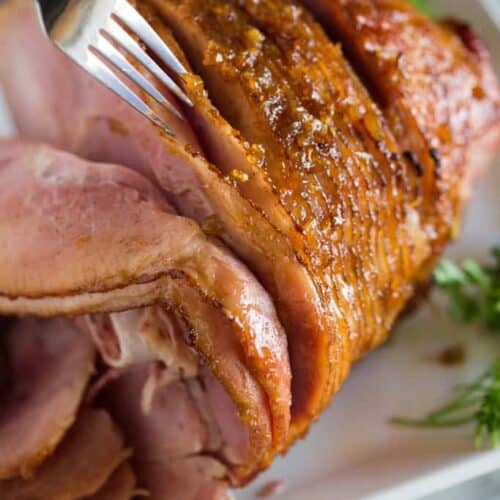 Leftover ham is perfect for Ham asparagus rolls,  ham bone for soup, and ham fried rice! For tips on making the perfect ham, see the post above.

RATE this recipe and COMMENT below! I would love to hear your experience. 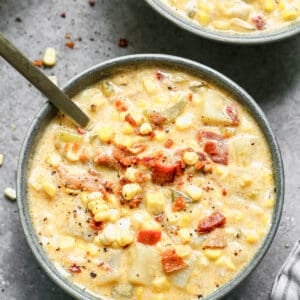 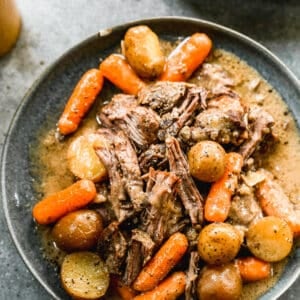 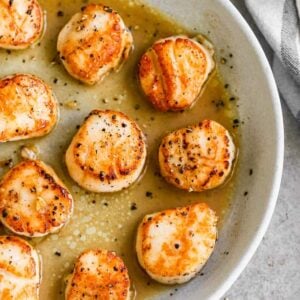