This DELICIOUS Clam Chowder with potatoes and vegetables is one of my favorite easy soup recipes to make during the cooler months. The clam chowder broth is thick and creamy like a Boston or New England clam chowder and it tastes like it came from a restaurant!

It’s soup season and I can’t tell you how happy I am about it! I love how warm and comforting soups are, but I also love how they are their own type of all-in-one meal. They have veggies and protein and all you need is a simple salad or a baguette and you’ve got a complete meal for your family.

I’ve come to learn that people can be as particular about their clam chowder as they are about gumbo! This recipe from my mom has all of the things I think make a great clam chowder including lots of clams, a creamy base, and very small diced potatoes. It’s amazing and super easy to make!

What is clam chowder made of? 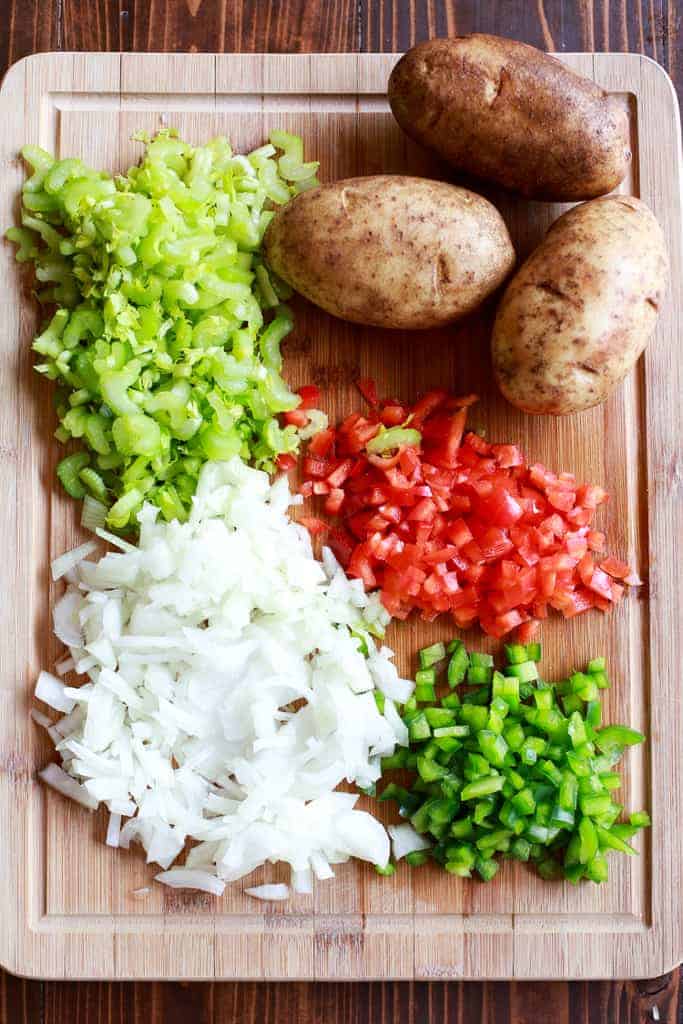 How to make creamy clam chowder:

Start by draining the clams and adding the juice from the clams to a large stock pot.
Next, add chicken broth and diced potatoes to the pot, simmer, and add the bay leaf.

While the potatoes cook, melt butter and olive oil in a second pot.  Add the onions, celery, bell peppers and garlic and cook until tender.  Stir in the flour, cook for 30 seconds and gradually stir in the milk and half and half. 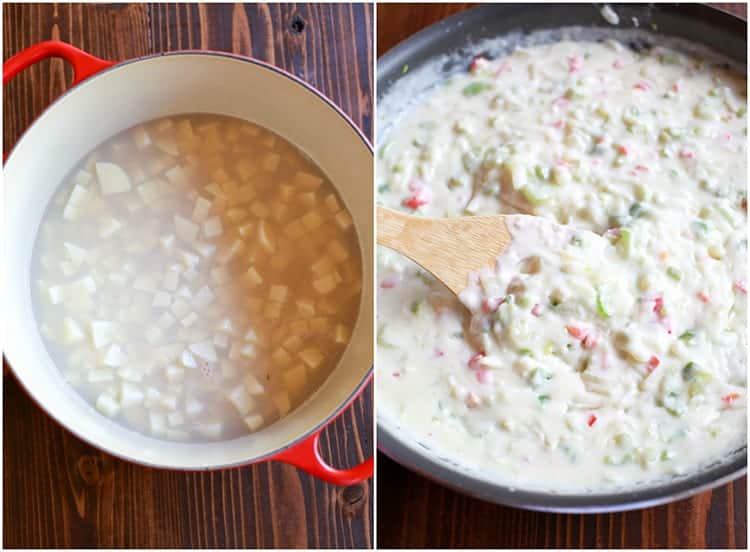 Simmer the mixture and cook until it has thickened. Stir the creamy mixture into the cooked potatoes.  Add salt, pepper, vinegar, and reserved clams. Cook for 5 more minutes. 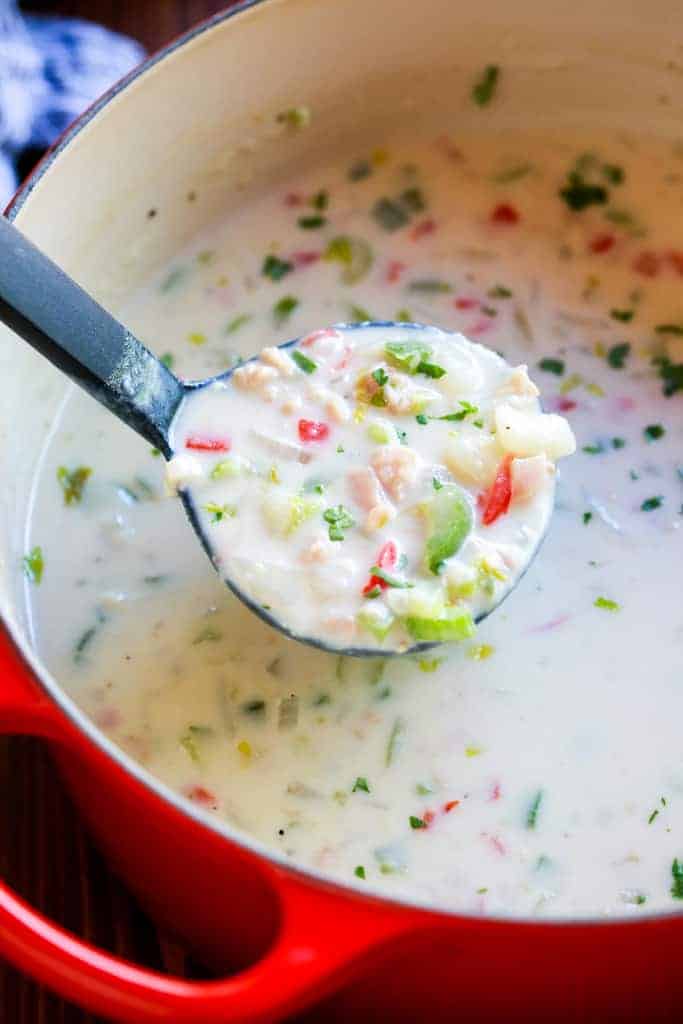 Can you freeze clam chowder?

I generally do not like to freeze soups with potatoes and in them because the potatoes can get soft and mushy. However, I know some people don’t mind and have frozen clam chowder successfully. If you do decide to freeze it, freeze it in small batches in freezer safe containers. 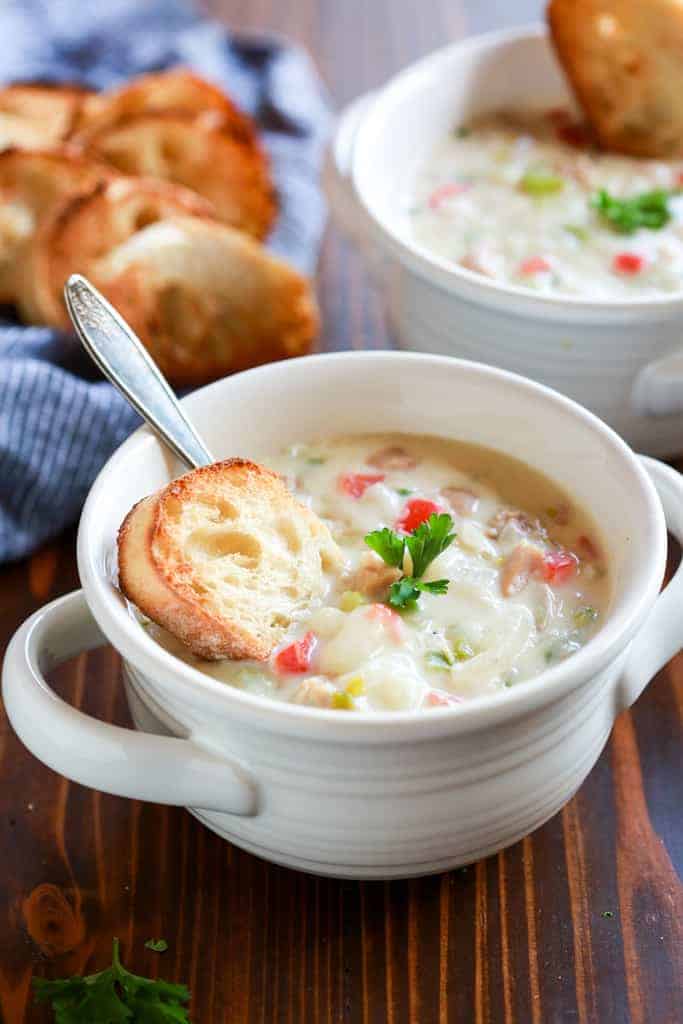 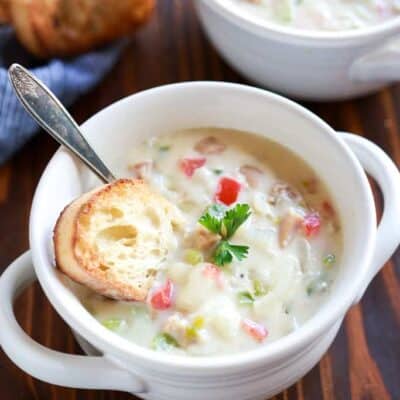 This DELICIOUS Clam Chowder with potatoes and vegetables is one of my favorite easy soup recipes to make during the cooler months. The clam chowder broth is thick and creamy like a Boston or New England clam chowder and it tastes like it came from a restaurant!
4.25 from 4 votes
Print Pin Rate Add to My Meal Plan Go to Meal Plan
Course: Main Course, Soup
Cuisine: American
Prep Time: 15 minutes
Cook Time: 30 minutes
Total Time: 45 minutes
Servings: 6
Calories: 337kcal
Author: Lauren Allen

Prevent your screen from going dark 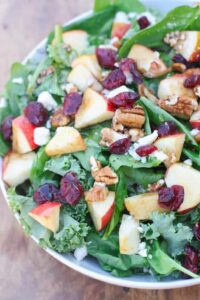 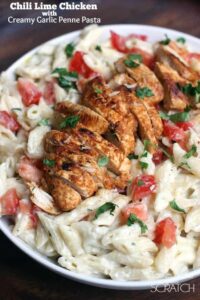 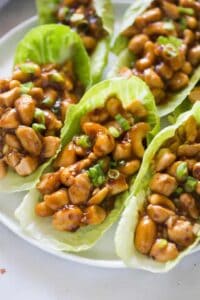 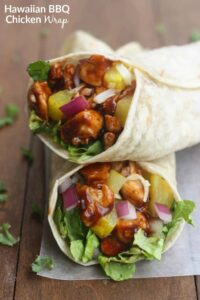