Recipe and instructions for Mexican tamales that you can steam or make in your instant pot. Easy and authentic pork and chicken tamales recipe with red and green sauce. 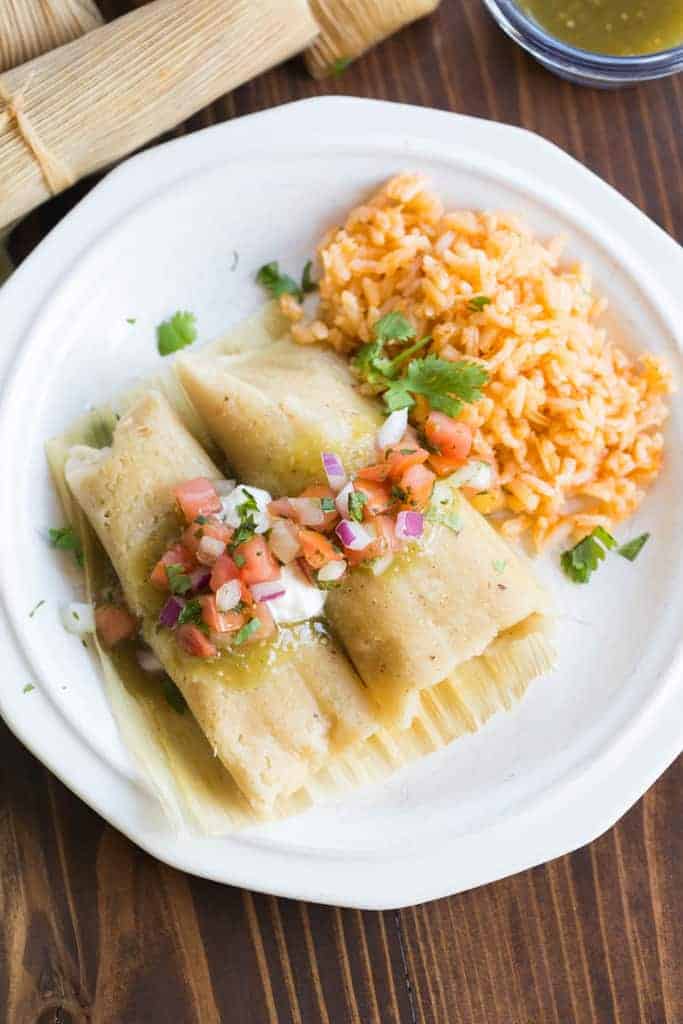 I first learned to make homemade tamales about 7 years ago, from a sweet elderly woman in Puebla, Mexico. My husband and I were living in Puebla for a few months and became friends with this woman and her family. Her daughter was the secretary at the office building where we worked. 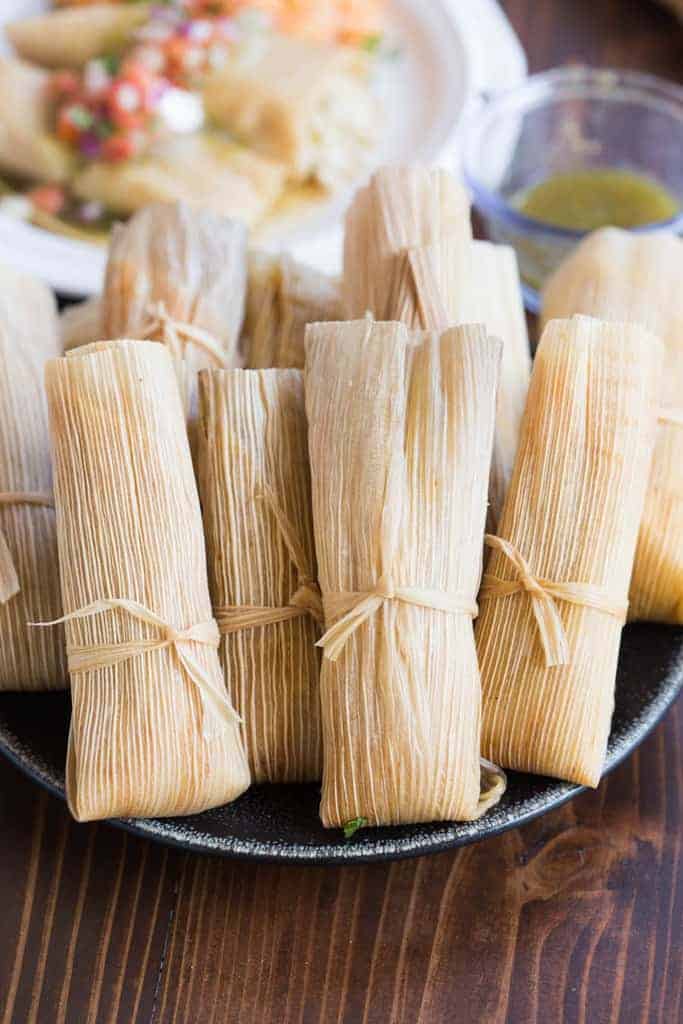 The grandmother made incredible tamales! She made her masa dough completely from scratch, using dried white corn kernels and an ingredients called “cal” that I can’t find in the U.S.

I expressed my desire to learn the ins and outs of authentic Mexican cooking, so the Grandma invited me over for a “tamalada” or Tamale making party.

What is in a tamale?

Tamales are a traditional Mexican dish made with a corn dough mixture (often maseca) that is filled with various meats.  They are wrapped and cooked in corn husks or banana leaves!  Below you will find a recipe for pork with a red sauce and chicken with a green sauce.

Tamales can be quite a process–especially in the traditional Mexican way when you make several different fillings, all from scratch. We had a great time making pork tamales with red sauce, chicken tamales with green sauce, and bean and cheese tamales.

Do you eat the whole tamale:

Tamales are wrapped and cooked in a corn husk.  The corn husk is not something that people typically you eat!  After making your tamale, you unwrap the corn husk and remove the food from it.  then enjoy your tamale with pico or other desired toppings! 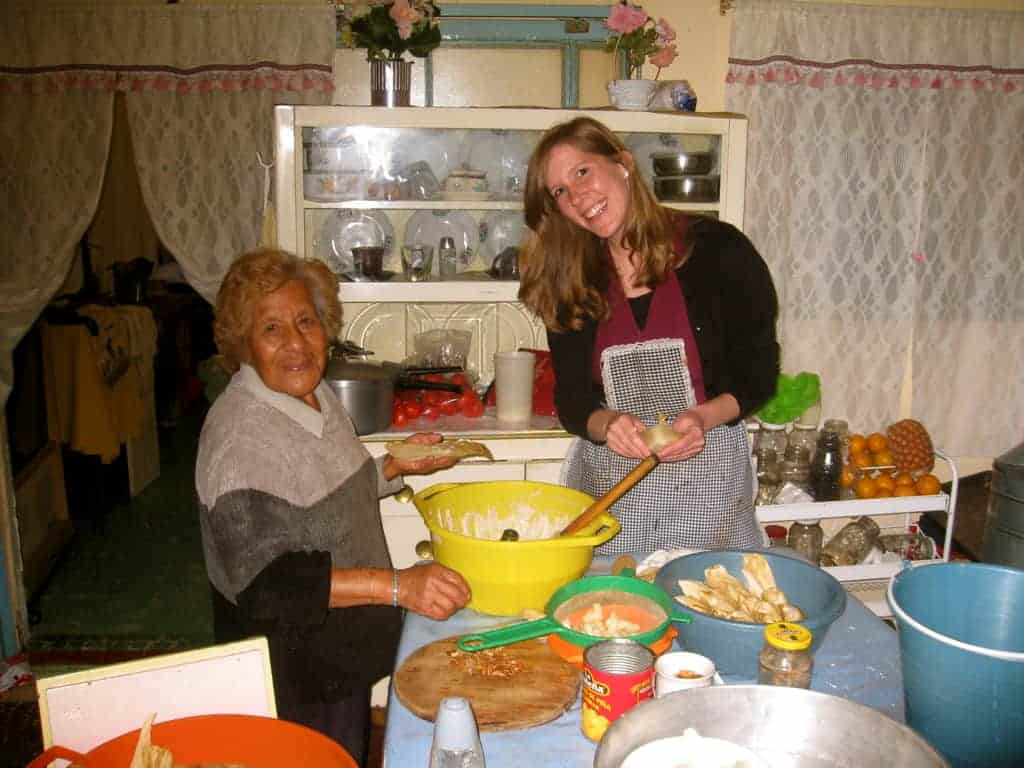 When I got back to the states I decided to make the tamale dough using Maseca, or masa harina (which you can find at most grocery stores in the Mexican food section). Making the dough for tamales is EASY and sooo delicious!

How to Make Tamales Step by step:

First make the dough (see recipe below).  Once you make the soft tamale dough, spread it onto corn husks. I use a piece of plastic wrap to spread it out into a thin layer.  Remember that the corn husks are vital in cooking the tamales but they are NOT meant to be eaten with the tamales! 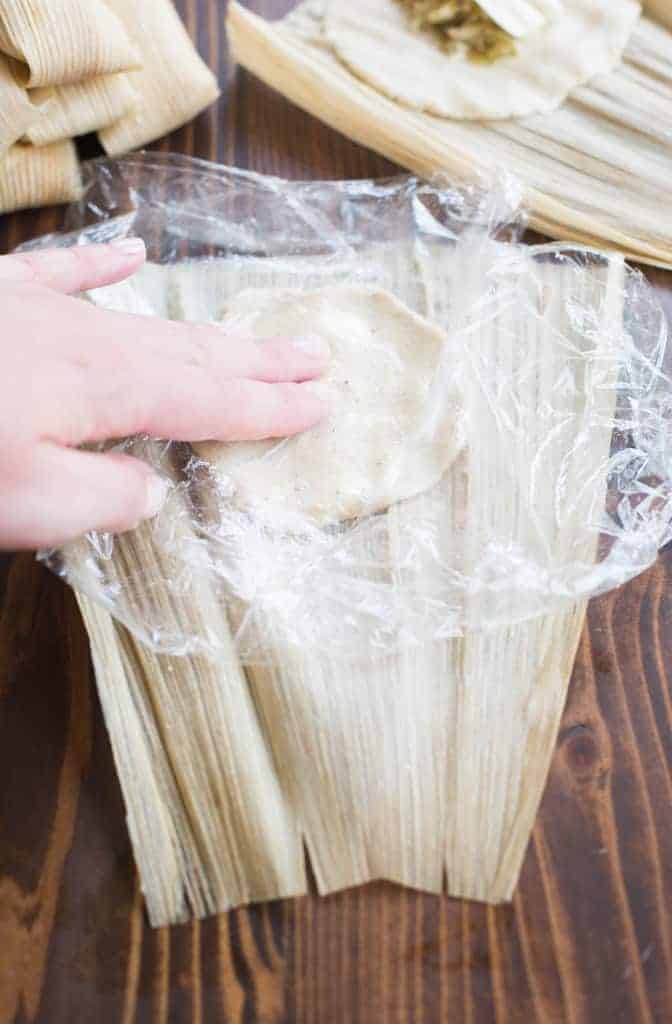 Next, add you favorite tamale filling. I like to make my tamales with a few different fillings, just like we did in Mexico. I make the pork and red sauce from scratch, and then use shortcuts for the chicken and green sauce and bean and cheese. That way I get several different flavors, without spending too much time and energy.  You could make yours all one flavor, if you’d rather. 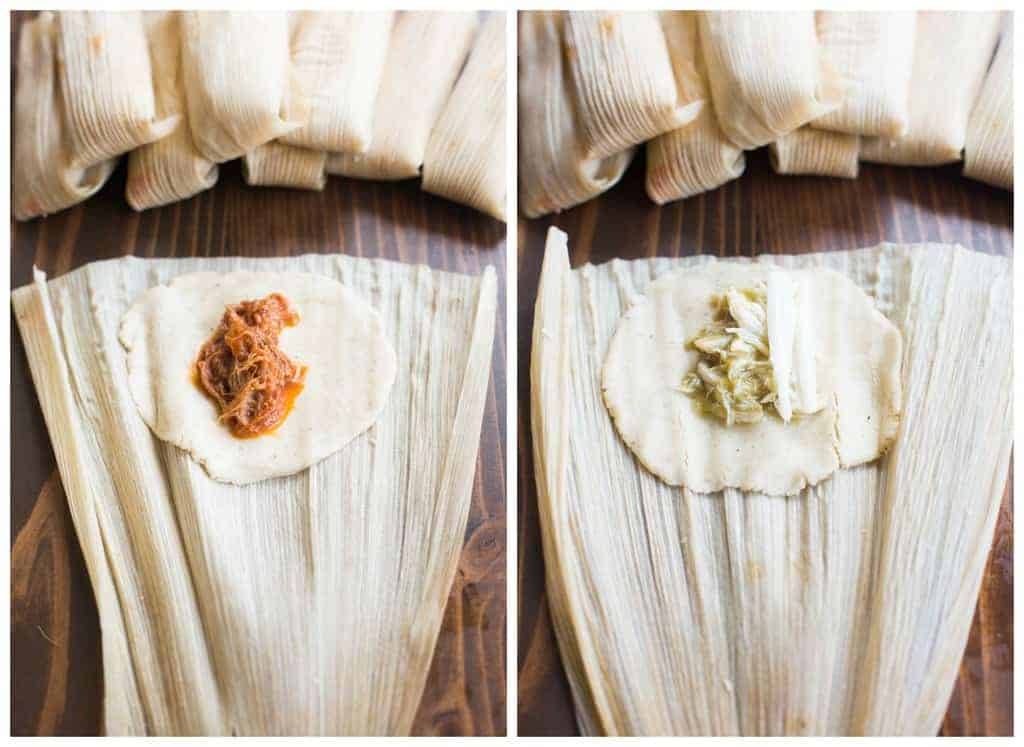 Now you’re ready to fold and cook them!

Fold in one long side of the husk about 1/3 over dough and filling. Fold in the other long side, overlapping the first (like folding a business letter). Fold the bottom of the husk up. You could tear an extra corn husks into strings to tie around the tamales, if you want, but it’s not required. 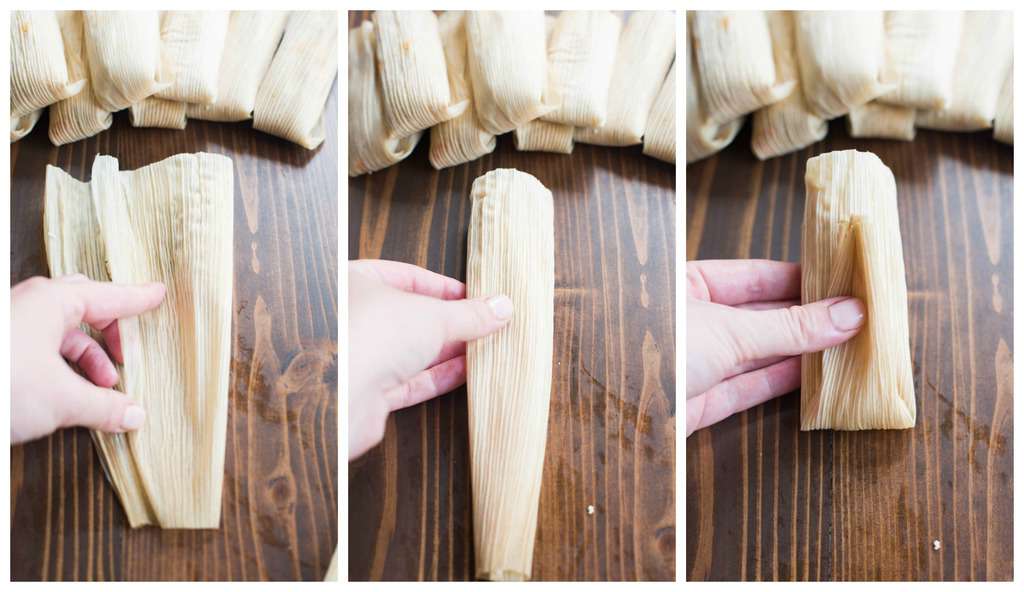 In Mexico we made the tamales pretty small, so that we had tons to send home and freeze for later.

When I make these at home I’ll often make them much bigger because we like them with more filling in them. If your corn husks are small, you can overlap 2-3 together to make a bigger surface for spreading and folding the bigger tamales.  You can make yours however big or small you want. Just cook them for a few extra minutes if you make them bigger then stated in the recipe. 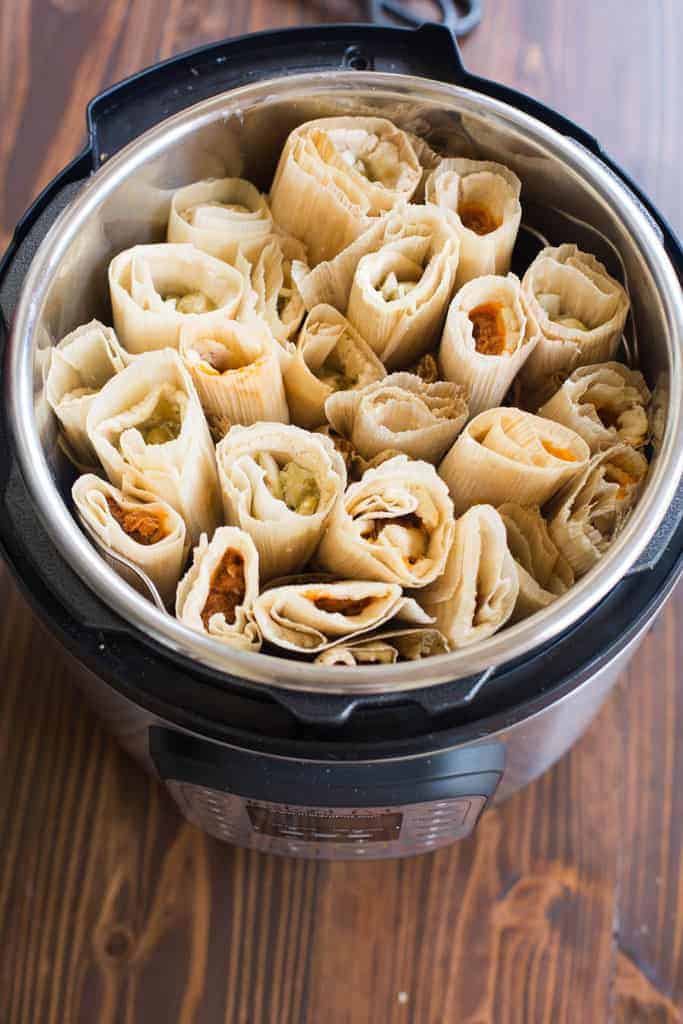 There are just two main steps to making homemade tamales.

You can fill the tamales with whatever meat and sauce combination you like, or fill them with beans and cheese. I have provided the recipes for a pork and red sauce filling, and a chicken and green sauce filling.

Tamale dough is really easy to make, thanks to our good friend, Maseca, that you should be able to find at your local grocery store, in the Mexican food aisle. The dough also contains lard. Yes, I know, it sounds disgusting, but it is what is authentically used in tamales and it makes for great tamale dough! I’ve found lard at Walmart, near the shortening. You could substitute vegetable shortening for lard, if you need to.

Follow my instructions for making the dough. Then test if the masa tamale dough is ready by placing a tiny ball of dough into a glass of water— If the dough floats, it’s ready. If the dough sinks to the bottom of the glass then beat it for longer and add a little more broth. Test again. The dough should spread like creamy peanut butter and be slightly sticky.

If you’re up for some authentic shredded pork and red sauce, follow the recipe below. The pork takes just a few minutes to throw together and cooks in the crock pot overnight. The homemade red sauce is also really simple and delicious.

Or, if you’re looking for quicker filling ideas for your tamales, try the chicken and green sauce tamales recipe below. Just mix some shredded, cooked chicken (I use rotisserie) with a bottle of Herdez salsa verde. (I love the Herdez salsa brand and think it tastes just as good as homemade). You could also fill your tamales with a spoonful of refried beans and shredded cheese. 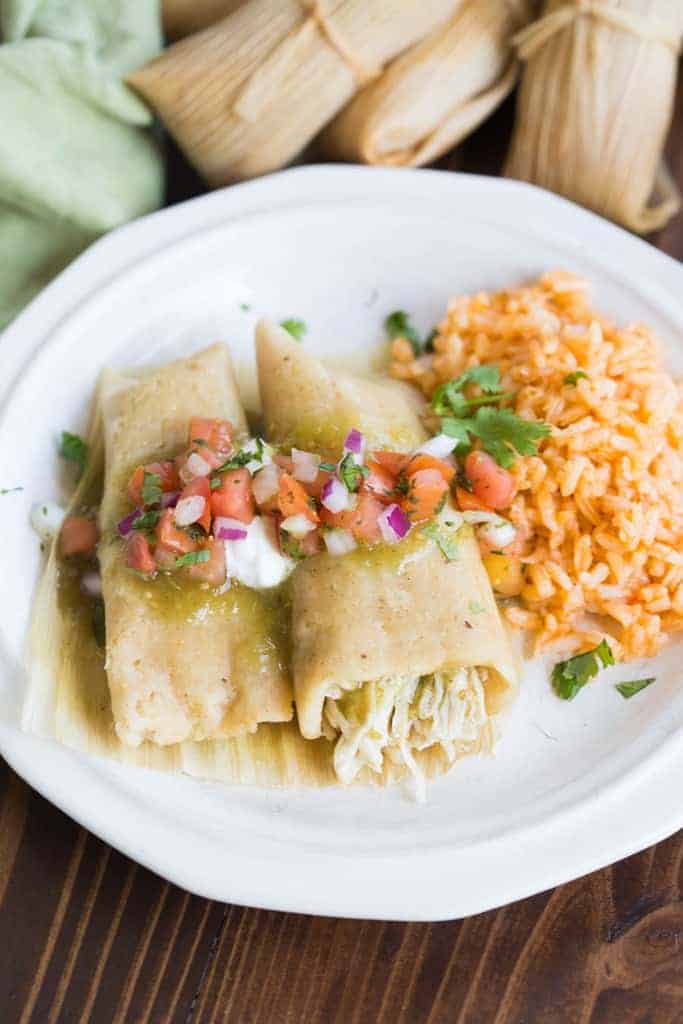 How to cook the tamales:

The tamales can be cooked in a steamer, or Instant Pot. Place them, open-end facing up, in the pot, packed just tightly enough to keep them all standing.

You can test if the tamales are cooked completely by removing one from the pot and pulling the husk off. If the husk comes off easily and cleanly, they’re done! If not, you can steam them for another minute or two.

Freeze your extra tamales and reheat them for later!

Tamales make the BEST freezer meals for busy nights. Serve them with a batch of Authentic Mexican Rice and you’ll be in heaven! To freeze them, allow the cooked tamales to cool completely, then stick them in a freezer ziplock bag. Freeze for up to 3 months.

When you are ready to eat, wrap the tamales in a few dampened paper towels and place them on a plate.  Microwave them for 2-3 minutes or until warmed through.  The wet paper towels will help them “steam” as they are reheated. Be careful when unfolding them–they will be hot!

For the Red Chile Sauce: 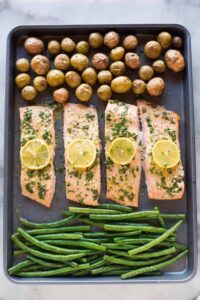 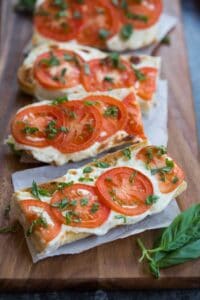 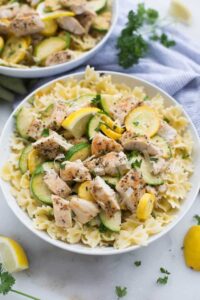 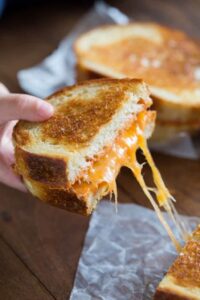